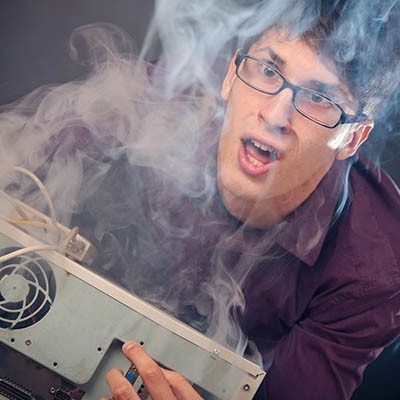 Learn Why Backups are Most Crucial to Users Data loss is no joke - and we’ve heard plenty of stories from people who have experienced it firsthand, when personal or business data was lost. We appreciate everyone who shared their experiences with us, and allowed us to post them here. First, we’ll tell the story of someone who learned something in college that wasn’t in the syllabus.

Don’t forget to share your own stories with us in the comments!

College was a pretty great time for me, so I have a lot of good memories of it. Of course, they weren’t all great... One memory in particular still bothers me a little: when I almost failed in sophomore year because my computer went bad.

I went to college to study journalism, so there was a lot of writing involved. So much so, that my Dad surprised me before I started my second year with a computer for my dorm room so I could write and edit my copy in peace. The student computers on campus were a little ways from the dorm, so it was nice not to have to hike across campus by myself.

Sophomore year started wonderfully - I wrote a few articles for the student paper each week, and I got some of my general studies courses out of the way so I could focus on professional development during my later years. I even went abroad for a few weeks on a mission trip that fall, and had assembled quite a photo album with the digital camera I had bought for the occasion.

However, toward the end of that first semester, everything went wrong, all at once.

I had heard I should keep up a backup, but I really didn't think I'd have a problem. My Dad had just bought me this new computer just before the semester started, so everything was updated and new. I had a copy of *most* of my files when I moved them over to the new computer, so I figured I was in good shape for a while.

Then, just before Thanksgiving, I was in a bit of a rush. My roommate had already taken care of everything she had to and was pretty much just waiting to go home for the holiday - she just had a few more classes to attend.

I, on the other hand, was swamped - I wanted to get a few assignments started before break so I wouldn’t have to play catch-up after, and I had bitten off more than I could chew.

I had to make sure I would have enough time to write everything that the paper would need after break, so I was trying to get a head start on some projects I knew were coming up. One was a research paper for the global history course I was taking.

Knowing full well that very few college students would work on a research paper before a break, the professor had literally had us drawn our topics from a hat. I had pulled… the Hussite Wars, I think... and I had already put together an outline for this paper to be built around. This thing was supposed to be pretty hefty, with a full bibliography, according to our professor.

So there I was, typing away as my roommate watched Miss Congeniality for the third time that week. Just as Sandra Bullock was teaching self-defense using the SING technique, my computer started making weird sounds, and suddenly the screen went blank.

After a moment of shock, I started to panic. I had just put in hours and hours of work on this paper, and it was suddenly gone. Then I looked closer - everything was gone. All of my files, all of my work - everything… including the pictures I had taken during my trip.

My heart was broken, and my gut felt like it was filled with concrete.

It was late at night, so campus IT services had already gone home. I couldn’t sleep a wink, and the first thing I did in the morning was to haul my computer over to the IT service desk. They looked it over, and found that there was, unfortunately, nothing they could do to restore my files, although they got the computer working again.

I went home for break pretty stressed out - not only had I essentially wasted a ton of time on work that I was going to have to redo, I didn’t have all of the pictures that I had from my trip - those were what really hurt to lose. That’s why I was so happy when my Dad reminded me that I had already made him a CD of all the pictures I had taken, and he made me a copy to bring back.

The next few weeks were miserable, as I basically had to stay up all hours to get everything done. Somehow, I managed. I have since learned my lesson, and when working on an assignment, I ALWAYS keep a backup - although I don’t use a CD anymore.

What We Can Do Better

To protect your business’ data, you should always have more than one copy of it saved, and these copies should be kept in separate locations. While you should be taking multiple backups a day, it is best if they run continuously, ensuring that the most work you would lose would amount to just a few minutes.

We want to thank our contributor today, and remind you that SolutionOne can assist your company with its data backup and continuity needs. Reach out at (214) 299-8555 to learn more about our solutions!

More posts from author
Wednesday, February 26 2020 Tip of the Week: Activate Microsoft’s Two-Step Verification
Monday, February 24 2020 Tech Giants Are in on AR
Friday, February 21 2020 Why Should You Outsource Business Processes?