SolutionOne has been serving the North Texas area since 2004, providing IT Support such as technical helpdesk support, computer support, and consulting to small and medium-sized businesses.
Categories
Tags 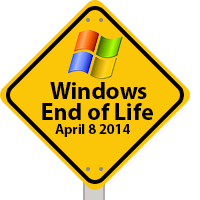 Security Concerns Can Derail Your Business

To ensure your data and user identities are secure, upgrading immediately makes sense.

Microsoft has announced that as of April 8, 2014 support will no longer be available for for their popular Operating System, Windows XP. The world's biggest software manufacturer has supported the software for 12 years, even though they have released three major OS's since; Vista, Windows 7, and Windows 8.1. Users that are still using XP will want to upgrade their workstations to one of the newer versions as soon as they can to avoid the many detrimental circumstances that are often associated with running non-supported legacy software.

SolutionOne is proud to announce the launch of our new website at www.solutiononeinc.com. The goal of the new website is to make it easier for our existing clients to submit and manage support requests, and provide more information about our services for prospective clients.